The Arcana of the Tarot: the Pope 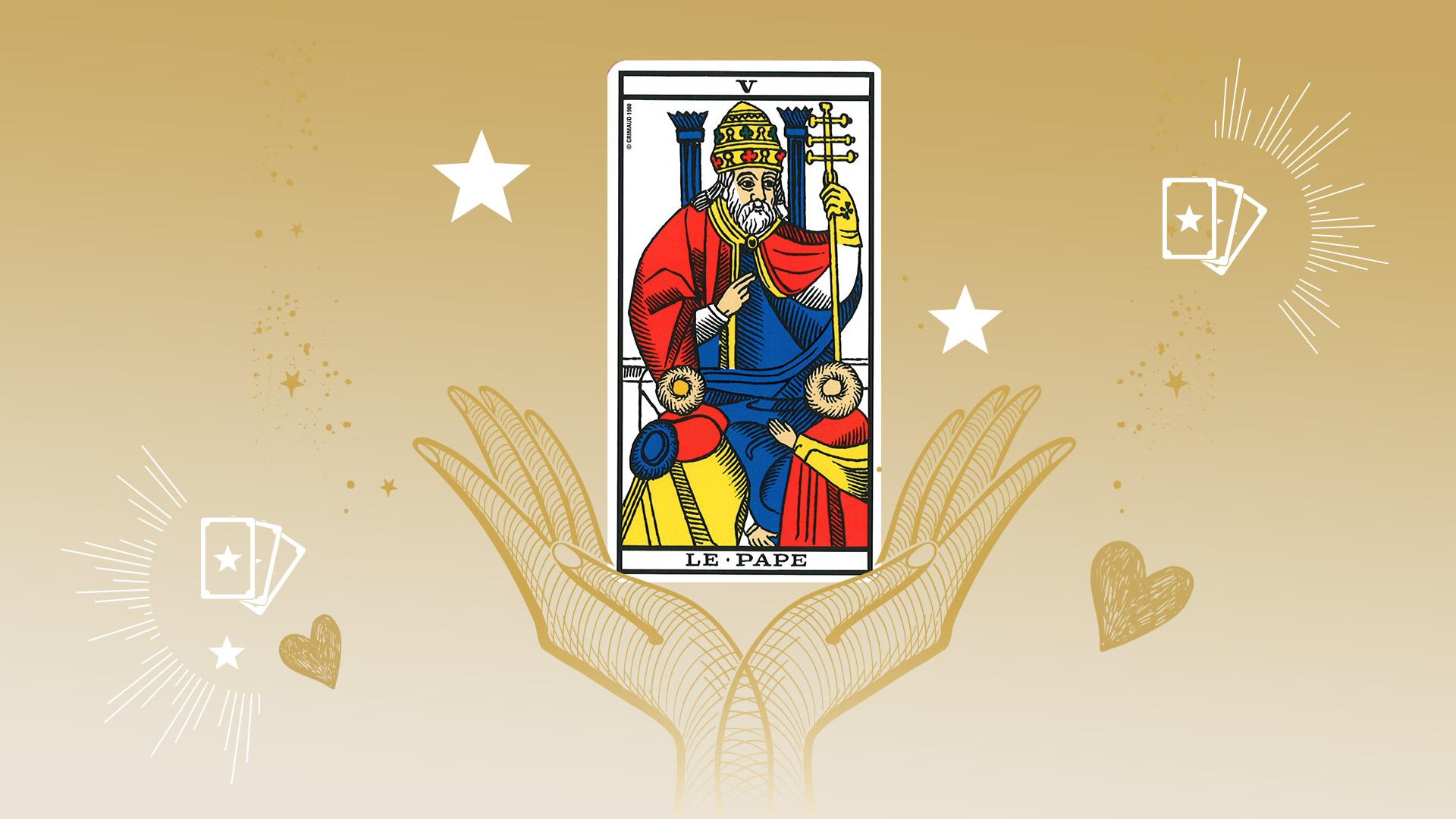 According to legend, the Egyptian sages, fearing that their sacred knowledge would one day be lost, decided to hide it in the last place where ill-intentioned people would think to find it: a simple deck of cards. Such would be the origin of the Tarot and in particular of the Tarot de Marseille which, in addition to being a marvelous divination tool, contains a true treasure, the esoteric and initiatory knowledge of ancient Egypt, itself heir to ancient Atlantis. Today we will study the fifth card or arcana: the Pope.

To understand the meaning and symbolism of a tarot card, it is important to analyze its shapes and colors. Here, for the second time after the emperor arcana, we are in the presence of an elderly man, with white hair and beard that inform us about the wisdom and maturity of the character. He is located in the center, between the two columns Yakin and Boaz, pillars of the universe, masculine and feminine, Yin and Yang that we had already met in the arcana of the Papess and the Empress. They were then hidden behind a veil. Here, they are fully discovered, which indicates that the Pope is there to give us an explicit teaching on the workings of the universe. Moreover, the gesture he makes with his right hand is traditionally a sign of teaching, of transmission. He points to his left, a direction associated with intuition, with the analogical mind. He thus comes to enlighten through a constructed and logical teaching what was already intuitively accessible. It thus becomes a mediator, a bridge between the divine world and men.

Its name in English is The Hierophant. The hierophant (from the Greek hieros, which is sacred, and phaino, to discover) is the priest who reveals the mysteries to the initiates, the latter being represented on the card by the disciples who are at his feet and who symbolize the passive, contemplative path on the left and the active, intellectual or operative path on the right. Moreover, the fact of having placed him in the fifth position owes nothing to chance. In numerology, 5 represents man, 4 (manifested world) + 1. Man is thus the incarnated Word generated by the Divine or the universe to understand itself. But back to our image, the Pope wears a three-tiered tiara indicating his dominion over the 3 spiritual, astral, and physical worlds. This is confirmed by the three-tiered cross. He wears white gloves, symbolizing the purity of his actions, carrying a Maltese cross symbolizing the centripetal forces, that is, the forces that move towards the center of all things, of all being. It also indicates that all spiritual or religious traditions are working towards the same goal. We can also see that he is dressed in blue, the color of spirituality, but covered with a red coat, the color of action. We are thus in the presence of the lunar aspect of the masculine force, turned not towards physical action as with the Emperor, but towards the world of thought and knowledge.

In a printout, the Pope can indicate that we need to deal with a problem in depth, with hindsight and reflection. He can indicate a spiritual or religious path. He can also represent higher education, training. He also represents respect for tradition and principles and, in the field of love, can indicate a marriage in good and due form.