Do not miss the Jupiter-Neptune conjunction! 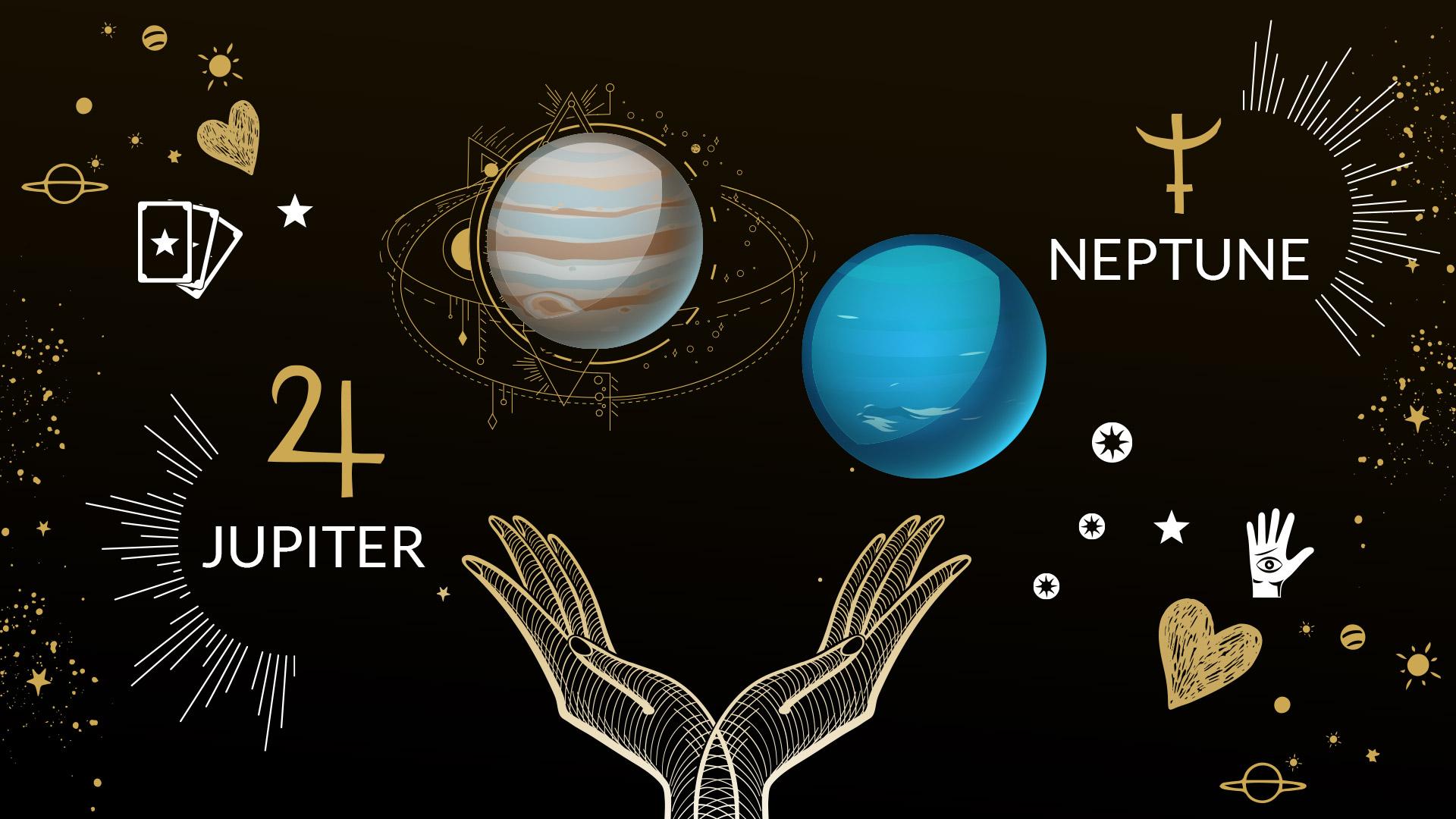 On April 12, 2022 at 4:46 pm Paris time, the most important conjunction of the year will occur: that of Jupiter and Neptune in their sign of control, Pisces. The last time this happened was in 1856.

An astral event of great importance

The effect of this conjunction will be felt until April 26. On a personal level, Jupiter allied to Neptune will arouse in us strong aspirations towards spirituality. We will feel strongly in search of a profound meaning to our existence and that of the universe. This could lead some of us towards mysticism, meditation as well as towards certain religious currents with the risks that this could also entail of joining a sect or a fundamentalist group. For those with an artistic sensibility, this conjunction will bring a tremendous boost of inspiration especially in the fields of visual arts, music and poetry. For everyone, Jupiter and Neptune will allow for a real opening of the heart and of the higher consciousness. We will become aware of being part of a greater whole formed of interdependent elements and it will be easier for us to show compassion and solidarity towards those who suffer and need help.

Zoom on the signs of water, Earth and mutable

Of course it will be the Pisces natives who will feel the most the effects of this conjunction which will really open new perspectives in their lives. They will reconsider the things that make up their daily lives and put them into perspective. Some Pisces may experience a mystical and existential crisis. It will be much the same for the other water signs, Cancer in particular, who will find a spiritual light capable of curing certain anxieties or even depression for some. Scorpios will have every interest in trying their luck at a game of chance and thus perhaps win a nice sum of money. Under the effect of this conjunction, Capricorns will give up some of their rigidity and will let themselves be touched, to the point of expressing emotions and feelings that we didn’t know they had. Taurus could see true love blossom in their lives… unless it’s the return of a loved one. The mutable signs may not experience this astral event as well. Gemini and Virgos, for example, should be wary of signing any contract, hiring, selling… or even marriage during this period, as there will be risks of deception or fraud. Sagittarians, overflowing with generosity and human warmth, will have to be careful that their goodness is not abused.

Hope and solidarity in difficulties

On a global level, this Jupiter-Neptune conjunction is very important, as it occurs only once every 12 years or so (the last time was December 21, 2009 in Aquarius) and even less often in the sign of Pisces (1856). When it occurs, it announces a powerful collective revival of social ideas of solidarity and mutual aid between people and individuals. Also, we could then witness a very strong planetary impulse for world peace as well as a great return to spirituality and religion. On this last point, we must be aware that, Neptune being a planet of illusion, it can also encourage the emergence of sectarian or radical religious leaders or movements, or deceptive political currents, based on the manipulation of the masses. It is therefore advisable to remain vigilant and to be discerning. However, this could also be a time of great revelations of hidden things, of scandals, but here again it will be necessary to sort out the false from the true. On the other hand, Jupiter being a planet that amplifies things and Neptune governing hydrocarbons, it is to be feared that the price of gasoline will increase spectacularly under the effect of this conjunction. In terms of weather, this conjunction could bring a lot of rain and even flooding. If we now look at how this conjunction is positioned in the astral chart of the 5th Republic we see that it is located at the ascendant of this chart. Neptune is the ruler of this house as well as of the 12th house (the trials of a country), Jupiter is the ruler of the 10th house, the government, with which these two planets are in square. It is therefore likely that this conjunction will put the stability of the government in great difficulty, as it will have to deal with both a strong increase in prices and « embarrassing » revelations. If, finally, we look at the effect of this astral event in the natal chart of the Head of State, Emmanuel Macron, we can see that Jupiter, ruler of the 11th house, is in square to his natal Venus in Sagittarius in the 11th house. In his chart, Venus is ruler of the 8th house (existential crises, radical transformations, symbolic deaths). We can interpret this by the fact that his initial projects could be compromised around this date and that they could be more or less abandoned by those he thought were his allies. The president could then experience some disappointment.